In glorious conditions, a field of 64 golfers saw out the last of the summer sun playing a Texas Scramble format hotly contested by teams from Kinly and its partners including: Barco, Lenovo, LG, Midwich, Neat, Nuvias, Peerless, Pexip, Poly, Samsung, Sandford, Sony and Techdata.

Players were greeted with a bacon roll, hot drink and goody bag complete with Kinly merchandise. Then, upon the 11am shotgun start, participants dispersed out onto the course to join their teams and tee off.

On designated holes, golfers were gifted the opportunity to win £25,000, a holiday in Portugal and a two-night golf stay in the UK by achieving a hole-in-one. Unfortunately, these prizes remain unclaimed. Additional prizes for the longest drive and nearest the pin were on offer, with the winners scooping a new driver and putter, respectively. 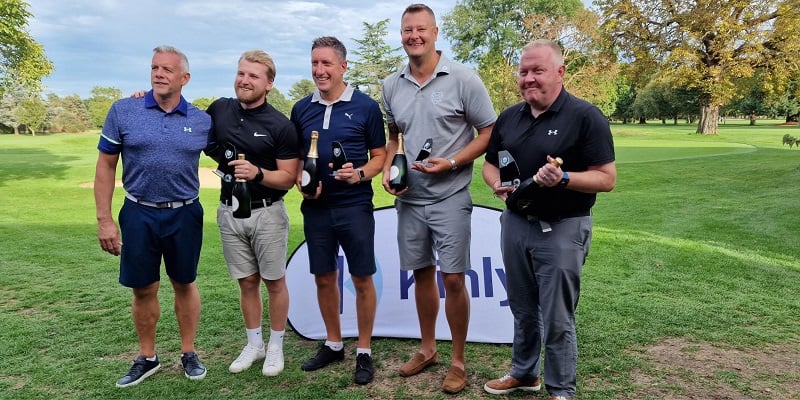 Once the final putts were sunk, guests were treated to a BBQ, a prize giving ceremony and a raffle. This was followed by a minute’s silence in honour of Her Majesty Queen Elizabeth II which was met with great applause.

With scores kindly calculated by the team of pros at Ashford Manor, the results were in with Team Neat narrowly pipping Team Kinly and Team Midwich to the post.

However, the most important statistic of the day was the sizeable four-figure sum raised for Young Minds, with all attendees digging deep to purchase raffle tickets and mulligan balloons. Special thanks go to Kinly’s volunteer team for organising the event and always being on-hand to provide much-needed hydration throughout the day from the ever-present drinks buggies.

Matt Keen, UK and Ireland Commercial Director, Kinly, comments: “The charity golf day is always a brilliant opportunity for Kinly staff – old and new – and our partners to come together, network and build on relationships through some friendly competition. However, above all, it’s a great way to raise important funds for a worthy cause close to everyone’s hearts at Kinly.”

Stacey Moore, UK Charity Committee Lead at Kinly, said: “I’d like to extend a huge thank you to everyone who attended our second charity golf day. It was a brilliant day; the weather was on our side and we raised a great amount of money for a fantastic cause in Young Minds. Congratulations to the winners and all those who volunteered and took part, we can’t wait to welcome you all back next year.”