Kinly promotes Chico Dominguez to VP of US Service and Support

Kinly – a leading AV systems integrator and remote collaboration service provider– is delighted to announce the promotion of highly accomplished Chico Dominguez to the role of vice president of US service and support.

Part of a recruitment drive in the US, adding even more strength to bringing world support and services to new and existing clients – including many Fortune 500 companies – this new role sees Dominguez taking responsibility for all technical operations and service delivery including installation, fabrication, programming, engineering, project management, and US helpdesk.

Based in New Jersey – and reporting to Kinly’s newly reappointed US managing director, Vel Johnson – Dominguez first joined Kinly as director of operations in 2007, where he was responsible for a team of just 12 people. Kinly US today now has a team of almost 140, a figure likely to grow during the course of this year and in to 2023, as the company continues to execute a globally aligned strategy. 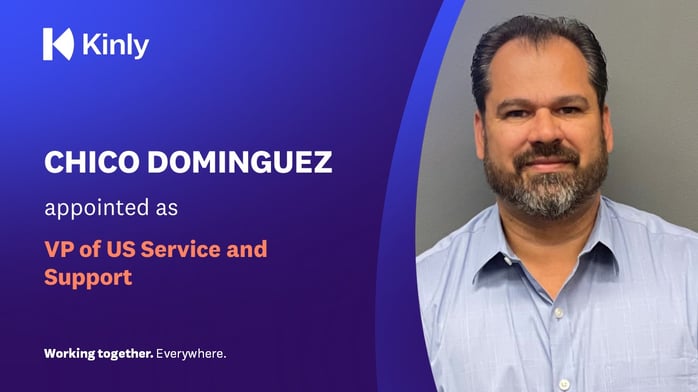 Before joining Kinly, Dominguez gained considerable experience in IT services and supporting video conferencing facilities at Johnson & Johnson. It was during his tenure there that the devastating events of 911 stopped corporate travel for months. In order to keep business running, J&J invested millions in videoconferencing and that is when Dominguez realised that this was the future of communications.

Dominguez explains: “I am delighted and excited to extend my role and responsibilities with Kinly in the US. The company has experienced some incredible growth since I first joined and with the further strengthening already executed and planned, the opportunities for growth are vast.”

He added: “I joined Kinly because I felt I could make a difference. I wanted to be part of a technology company that I could help to grow and define. When I joined in 2007, I had a team of 12 people whereas I had been working for an organisation with more than 120,000 employees. I realised that I was no longer a number and would be able to transform the culture and future growth of this business.”

Vel Johnson, Managing Director, at Kinly US, added: “Chico is a videoconferencing pioneer and from day one, he has been making his mark at Kinly and shows no signs of stopping. His excellent technical knowledge has gained him the admiration and trust of colleagues and customers throughout the business, while his unwavering determination to do the best possible job plays a huge part in Kinly’s ongoing success.”